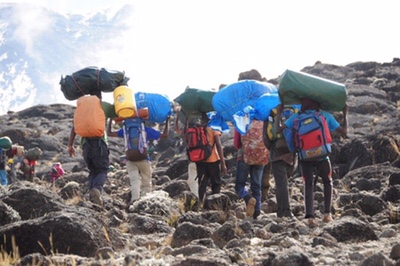 Required throughout Europe and North America is the benefit for the working ppulation to be covered by health insurance. This is not the case in most African Countries, including Tanzania.
Whopping 1,200 porters operate on Mount Kilimanjaro and Meru have been enrolled in a health insurance, offering them a ray of hope, thanks to a responsible travel company.
Zara Tanzania Adventurers, through Zara Charity, has enrolled the porters into Tanzania’s National Health Insurance Fund, in an effort to improve porters’ access to medical care.
Billed as incredible move, the pioneer porters health cover, not only addresses historical injustice for poor mountain crew, but also significantly raises the Zara’s profile as the dedicated, responsible and ethical travel company.
Mount Kilimanjaro Porters Society (MKPS) Vice-Chairman, Mr Edson Matauna said Zara Company has become a role model for pioneering the heath insurance drive for porters, imploring other tour firms to emulate the spirit.
“We are very grateful to Zara as it becomes the first tour company in Tanzania to cover mass low-income earner mountain crew with health insurance” Mr Matauna explained.
A report of the commission of inquiry the Kilimanjaro regional secretariat formed few years ago to establish the porter’s welfare shows that a significant number of tour companies have reportedly do not cover porters with health insurance.
“Nearly 53.2 per cent of porters questioned said they have been footing medical costs themselves,” the report reads, adding that porters also complain of working under extreme environment putting their lives in danger.
Contacted for comment, Managing Director for Zara Tanzania Adventurer, Ms Zainab Ansell confirmed to insure porters, but she declined to divulge details on ground that her faith doesn’t allow to make public offerings.
“I am a Muslim daughter who taught to extend a helping hand and not to make details public. It’s sufficed to tell you that it’s true I have covered the porters with health insurance” Ms Ansell noted.
Ms Ansell is probably one of unsung heroines of our time. Being a lady in the tourist business she fought extremely hard in a male-domain society to emerge successful.
Visit Zainab’s office on the workdays, you will be shocked to see long queues commonly found at health facilities in African rural outfits.
People from all walks of life throng Zainab’s office, each seeking to consult her, as is the case with a medical doctor.
But unlike a medical doctor, Zainab often wears an infectious smile instead of the much-dreaded stethoscope, as she serves one person after another with great humility.
In fact, some people never notice that she is at the helm of Zara Tanzania Adventurer — one of the biggest and prominent tour companies in the natural-resource richest East African country.
The rare personality traits in most Tanzanian chief executive officers have enabled her to touch thousands of lives, particularly those from vulnerable groups.
Her gifted hands have changed thousands of lives in Tanzania, as she directly employs nearly 1,410 on both permanent and seasonal basis, sustaining thousands of families in a country where unemployment is a hard nut to crack.
Official data puts the rate of unemployment in Tanzania at 10.7 per cent. According to the World Bank, each year about 900,000 youthful Tanzanians enter the job market, which is capable of generating barely between 50,000 and 60,000 new opportunities only.
Besides addressing unemployment, Zainab is also at forefront in extending a helping hand to the surrounding indigenous persons, mostly Masaai.
In her effort to support members of the pastoralists community, she has built a school where children under seven years of age are educated free of charge.
Zainab has not only constructed the school and left, she also runs the facility, with 95 kids, all from the Maasai nomadic pastoralists, pursuing their dreams in life. Without the school, the Maasai kids would have nowhere to study.
She has also developed a special window for helping marginalised Maasai women in her fresh bid to liberate them from harmful shackles of their traditional norms.
Zainab is single handedly struggling to address historical injustice compounded by oppression and exploitation towards women.
She has, in addition, been financially empowering the Maasai women to buy raw materials for making beads and selling them to foreign tourists.
As we speak, hundreds of Maasai women are benefiting from tourists’ dollars by hawking beads and carvings along the roads heading for key tourists sites.
Thanks to Zainab’s quest for seeing members of local communities directly get returns for conserving for ages tourist attractions surrounding them.
Zainab has bankrolled first aid training sessions, beginners’ English courses, HIV and AIDS education and financial management training, to mention but a few to nearly 900 porters.
She has initiated Zara Charity with an eye to stimulate a global movement on sustainable tourism by giving back to the community through the network of the travel industry partners, organisations, travelers and global citizens interested in reaching out to and supporting vulnerable groups in Tanzania.
Tanzania Association of Tour Operators (TATO), CEO, Mr Sirili Akko said his association is proud of Zara MD for her generous heart to support the poor.

The body of a tourist from Saudi Arabia who drowned in the River Nile in Uganda after falling in while taking a selfie has been...